This site has been built to honour all those who contributed to the outstanding successes achieved by the Carnarvon Tracking Station; their many friends and associates from those days; and the town that was our home.

There is a public seminar regarding Carnarvon and the space expedition at the National archives of Australia office in Perth at 10.30 am on Thursday 13th February 2020. See attached article for further details. 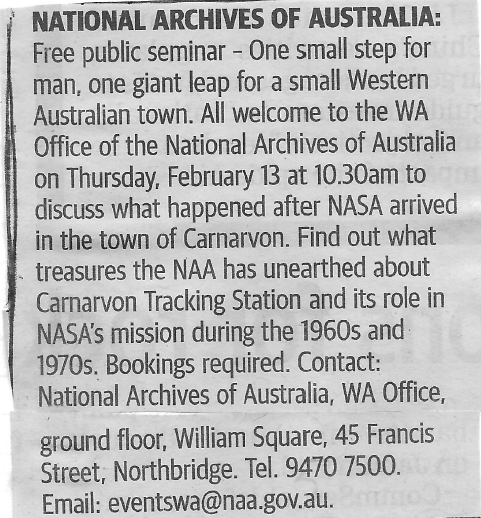 Carnarvon Space Tracking Station was sited on Brown Range, about six air kilometres from the town of Carnarvon, and occupied 259 hectares. It cost $4.5 million dollars to build and its operating cost was about $5 million a year (in the dollar value of the sixties).

It was established by the then Department of Supply on behalf of N.A.S.A., with all maintenance and operational services provided by Amalgamated Wireless (Australasia) Ltd.

The first tracking was in January 1964, when Ranger 6 was plotted during its first few hours of flight to the moon, by the FPQ-6 radar.

The Unified S-Band System was installed primarily for manned lunar missions, but it was also used to track some scientific spacecraft and the ALSEP packages. It had a 9m diameter antenna located in front of the T&C building.

Designed to receive the spacecraft telemetry signals shortly after horizon time and track the spacecraft with sufficient accuracy to provide suitable pointing data to other, narrow-band, tracking and command systems.

Sensitive receiving equipment and a 20kW transmitter were built into equipment compartments in the antenna structure. The remainder of the system occupied a large control room in the T&C building and was interconnected with most other equipment in the T&C area.